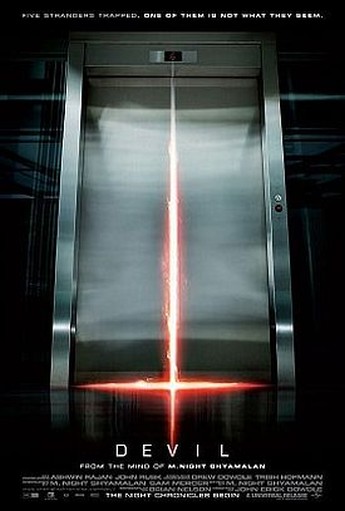 M. Night Shyamalan produced this, and this shaggy-dog story has certainly got his stamp on it. Five people are stuck in a lift; sporadically (as demanded by the plot), the lights go out, and one of them dies. A conveniently-passing detective (Messina), investigating a jumper from a high windown in the building, gets entangled in the situation. He initially pooh-poohs the suggestion from a security guard that the devil is in the details elevator. However, the weirdness that involves leads him eventually towards a radically different conclusion. It’s the kind of story which you can easily imagine The Twilight Zone doing. And that’s the problem, because those were thirty minutes including commercials. Even at a relatively-short 80 minutes, this still feels pretty thin, and from Lucifer’s point of view, haardly seems like the Prince(ss) of Darkness would want to waste his time listening to an easy-listening version of Don’t Sit Under the Apple Tree.

There just isn’t enough here to hang a feature on, and it’s a surprise no-one noticed this on the way to the screen. The screenplay relies far too much on misdirection, yet my first instinct as to which of the five is the devil proved spot-on. I could have tolerated that, if any of the characters had been interesting enough to hold my attention. Instead, outside of the detective (who is still struggling to come to terms with the death of his wife and child in a hit and run accident), they might as well simply be given numbers e.g. Elevator Occupant #3. Instead of any effort to make the most of the claustrophobic surroundings – a confined space with people you don’t know – you can instead see the hand of Shyamalan in that, like much of his work, this is basically a one-trick pony. It stands or fails entirely on how successful the viewer finds that trick; Personally, I tend toward the view that it’s time this particular pony made a one-way trip to the glue factory.