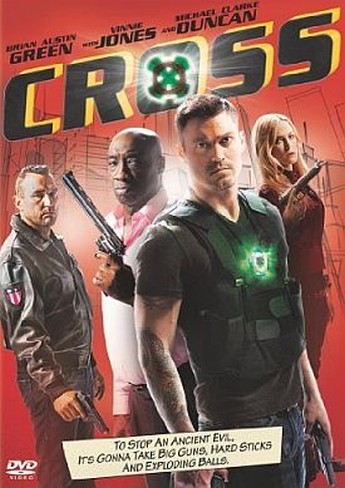 This is kinda like The Expendables for B-movie fans. In addition to the above, you’ve got Dannie Trejo, Jake Busey, C. Thomas Howell and Robert Carradine. All that’s missing is Rutger Hauer, and perhaps Dean Cain. But this stellar B-cast is almost entirely wasted. For example, Howell gets a cameo as a bartender, and that’s positively a main role compared to the two seconds of screen time Trejo received. And forgive me if this synopsis sounded… well, interesting: “When beautiful, young women start disappearing from the streets of L.A., it’s time for good-guy Callan (a.k.a. Cross) and his crew of weapons experts to kick into high gear and take out the trash. Granted incredible power by his ancient Celtic cross, Callan must fight to stop an immortal Viking from destroying mankind with his doomsday device.” Hey, that sounds cool, right? Or, at least, credibly entertaining in a crappy comic-book kind of way?

Nope. Despite some slightly-intriguing concepts, and Duncan + Jones being their usual reliable selves as villains, this is awful. It’s the good guys who are the problem, with far too many in the “team” jostling for their close-ups, without doing anything of significance, while Green is both bland and entirely forgettable as the hero. The cross in question hardly counts as “incredible power,” with it hardly being used until the finale, when it is mostly lame digital effects. The action scenes are just as uninteresting, and there is just too much damn talk going on. The plot doesn’t make much sense either: the bad guys are capturing women who are descendants of the gods and draining them of their blood, in order to activate some staff. All said women happen to be about the same age, attractive and live in LA. What are the odds? The film doesn’t even deserve this detailed scorn. I should have stuck with my first inclination, a one-line review reading, “Cross? You will be, if you waste ninety minutes on this.”