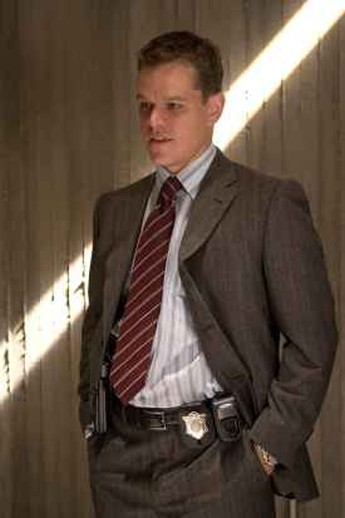 Perhaps having already seen and loved Infernal Affairs, on which this is based, a sense of let-down could be inevitable. Or maybe it’s that the extra 50 minutes running-time in Scorsese’s version doesn’t do much for the tension: he seems more interested in the dramatic angle, than the thriller aspects, which were so expertly evoked in the original. Hence, we get lots of scenes of DiCaprio’s character, a cop sent deep undercover into the Boston Irish underworld, expressing his angst about his loss of identity. The central theme, however, remains: both police and gangsters have an informer in each other’s organization, feeding out information to their true boss. The two sides attempt to root out the mole in their own ways, before their own man is discovered; neither side is prepared to take any prisoners in the process.

Let me say, however, that this is in no means a bad film. Scorsese is on very familiar territory, and there’s likely no-one better at the American gangster film, in the past fifty years at least. So, we get an uber-macho work, with an F-bomb about every 40 seconds [a new record for a Best Picture Oscar-winner], lots of violence and with issues of loyalty and betrayal to the fore. Of all the performances, it’s perhaps surprising that Wahlberg comes over best, playing a ruthless, dedicated, foul-mouthed cop. Some of the scenes are notably straight from the original, such as the rooftop and elevator sequences, though the ending does diverge in one very significant way. It isn’t quite enough, and what Scorsese brings to the table isn’t enough to replace what has apparently been lost in translation.