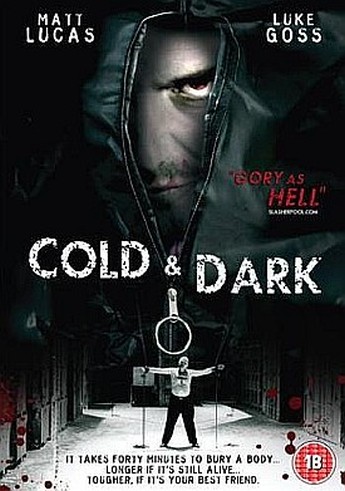 This is one of those films that has obvious, gaping flaws, yet I can’t bring myself to dislike it, since the movie is cheerfully intent on being exactly what it wants, even at the risk of confusing and alienating the audience. Such callous disregard for commercial considerations can only be admired. John Dark (Goss) finds his partner Shade (Howarth) dead, after a shootout at a warehouse. Only, Shade then comes back to life somehow, though Dark opts to keep quiet on this – until all the previously untouchable perps in their area, start turning up spectacularly dead, and drained of blood. Turns out Shade has become host to a parasite that resurrected him, in exchange for an ongoing supply of victims, which the cop is happy to provide, vigilante-style. However, the longer this relationship goes on, the more tenuous Shade’s humanity becomes. While Dark is initially not too bothered by the unexpected deaths among the criminal underworld, when an innocent decoy falls victim, he reluctantly concludes that his colleague may have become more of a problem than a solution.

For a good chunk, viewers will be as lost as Dark, at least under Mr. Exposition shows up, in the form of Dr. Elgin (Little Britain‘s Lucas, in a memorably-strange role). He lobs at least some points of data for us to cling to, though Goth is always much more interested in the visual aspects. The question he continually appears to ask himself is not, “Does this make sense?”, but “Does this look good?” and he doesn’t have the chops to manage both, even with copious amounts of narration by Dark. There’s one brilliant scene in a bathroom stall that works beyond everything else, perhaps standing out because Goth stops waving the goddamn camera around and changing filters every third shot. Irritating though that all is, and the same for the attempt to make this vaguely-American, I love the idea and its complete refusal to cop out for a simplistic storyline. I can easily see the potential, even if not fully realised – and await the big-budget remake, likely starring Jason Statham and Hugh Jackman.