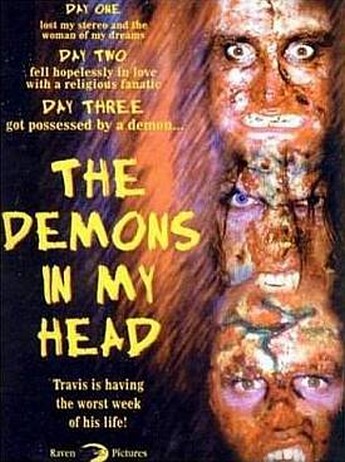 This one feels like they came up with the central idea, started making the film, then half-way through realised, “Hang on, guys – this isn’t going to work,” and so had to shift directions. At first, it’s SF, with impressive CGI space footage that far surpasses the low budget. An alien artifact, specifically a headset, drops into the yard of Travis (Mariconte), encased in a meteorite. Despite warnings from two conveniently-passing religious types, curiosity drives him to try the headset on, and he soon discovers he can use it to create whatever he wants. A minor problem is the gap between imagination and reality, with stuff not coming out quite right; worse, however (and cue sudden genre shift), it opens a portal to another dimension, where a demon is delighted to discover the new flesh available on our planet.

Immediately the SF angles evaporate, so does most of the potential in the concept – we’re talking a gadget with near-limitless power for good or evil, f’heavens sake! Instead, the second half degenerates into a poorly-executed cousin of Hellraiser, Travis fighting to dispatch the demon back to its own plane, randomly assisted by someone who resembles Dr. Who. The overall sense of quality and imagination that helped the first half work, all but evaporates, and what remains rapidly degenerates into bland tedium populated by unlikeable characters. Given the whole film was shot in only nine days, it’s not unwatchable, but this is definitely stretched too thin, and runs out of steam well before the end.

[Be somewhat cautious when buying this DVD. Our copy didn’t work in either of the two house players, and even when we exchanged it, the same thing happened. It played fine in the computer and a portable player though. I know other people have had similar problems, so it isn’t just us…]