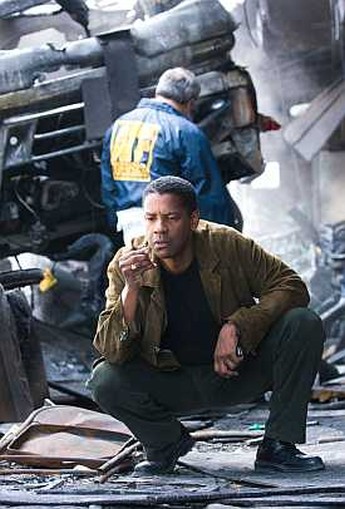 After a terrorist bomb takes out a ferry in New Orleans, ATF agent Carlin (Washington) is investigating. He is led to a government project, that allows him to see back in time, from any angle or location…but they can’t pause or rewind the experience. This gives them a golden chance to catch the bomber after the fact – but Carlin wants to do more, and ends up getting projected four days back himself, in an effort to stop the explosion before it takes place. Of course, inevitably, there’s a love interest (Patton), a victim of the terrorist before his big act, whom Carlin wants to see more of, after watching her through the time tunnel.

To be honest, I enjoyed this more earlier on, before the temporal angle arose: Washington is great in his role, and it’s a lot of fun just to watch him peel apart the case, irritating his colleagues in other agencies with his unconventional style. Once the SF angle kicks in, it’s harder to swallow, not least because it’s such a contrived scenario: the limitations of the mechanism are so obviously for cinematic purposes, it’s as if it had just arrived from the Plot Device department at Acme. If you can’t think of a hundred simpler ways to solve the case than Carlin going back in time himself, you’re not trying. From there on, it’s your standard Hollywood ‘get the girl, kill the baddie’ film; Scott does at least rein in the visual excesses which knee-capped Domino, and if the tying-up at the end might not stand up to detailed thought, this is solid enough as mindless entertainment.