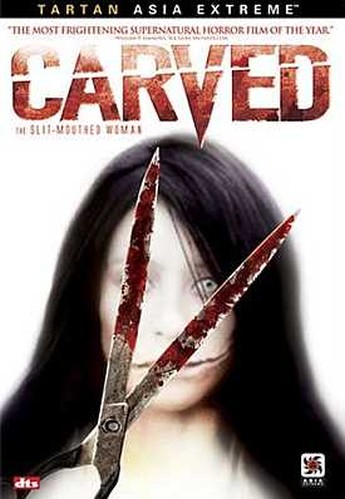 In 1979, an urban legend exploded around Japan. A young women with a surgical mask over her mouth approaches a child on the street, asking “Am I pretty?” She then removes the mask to reveal her mouth is slit from ear to ear, and asks again, “Am I pretty?” Now, these stories are again running rampant; only, she also kidnaps kids to inflict the same on them, with a large pair of scissors. At first, these are dismissed as hysteria – but then, children start vanishing for real. And when a teacher witnesses the abduction of one of her pupils, she’s drawn in to the mystery. Is it, as the police thing, merely someone imitating the mythical figure? Or is there something more to it? And what about her colleague, who hears voices every time a victim disappears and has a picture, taken decades ago, that looks just like the kidnapper?

If you’re looking for a Western equivalent, what immediately comes to mind is Candyman, both being horror stories about supposed urban legends come to life. It makes a good foundation for a film, and even though the gore is relatively restrained, the concept is effective and elegantly chilling, feeling like something out of a fairy-tale. I can imagine Japanese parents threatening naughty children with the story, telling them, “Be good, or the slit-mouthed woman will get you!” This is enhanced by an underlying theme of child abuse, giving it a solid grounding in the modern era – yet this also helps to enhance the “Grimm” feel: see Snow White, Cinderella, Hansel and Gretyl, etc. 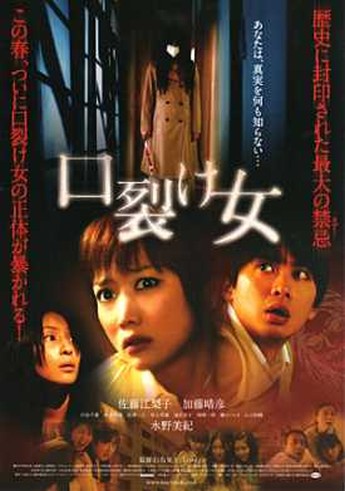 Perhaps unfortunately, a key factor is a mis-heard phrase that’s almost impossible to translate from the Japanese, and generally, there is too much contrivance involved. For example, a key memory is conveniently repressed until – surprise! – the climax of the movie, and this kind of thing does mean disbelief needs more suspension than is usually required. However, it is worth the effort, especially as events build to a nightmarish finale that moves at the speed of a sloth trapped in molasses. Which is actually a good thing, for if you’ve ever tried to run away in a nightmare, you know that’s exactly what it’s like. With particular credit due to a fine soundtrack, this is an effective, creepy genre entry, that’ll put you off pointy objects for a while.