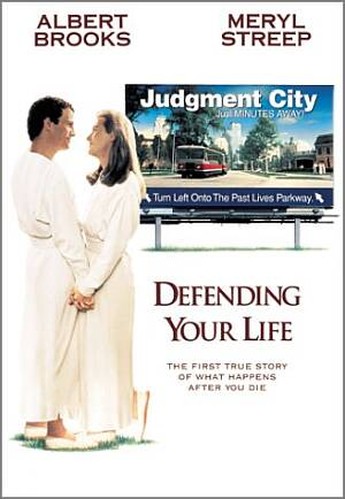 The concept here is fabulous – death is not the end, but leads to a trial to see whether you are good enough for progression, or should be sent back to Earth for another incarnation. Brooks is Daniel, an executive killed in a car wreck while reaching for a CD, whose his past is fought over by defence (Torn) and prosecution (Grant). Unfortunately, his benevolent apathy isn’t “good” enough, and Brooks felt the need to bring in Saint Julia (Streep) who rescues kittens from blazing buildings, and is the sort of irritating goody two-shoes I want to slap around a bit. She was probably a member of PETA who choked to death on her organic tofu burger – you know the sort. Predictably, the two fall in love, but will Daniel be found wanting and returned to Earth?

Not vicious enough to qualify as satire, the idea of the afterlife as a Californian holiday resort, with buffets that never fill you up, still has enough scope for the running time. I enjoyed the Past Lives pavilion (hosted by Shirley MacLaine!) – Julia, of course, was prissily heroic, while Daniel was an African chased by a lion, or “lunch” as he called it. The near-absence of religion is interesting; belief systems are irrelevant, and there’s only a passing mention of anything like hell. You could also see the two lawyers as the struggle within your conscience for self-justification. More than enough meat here, making it all the more a pity that Brooks felt the need to inject such a corny and unconvincing romance. Still, nice to be reminded now and again why my Streep-tolerance is low.