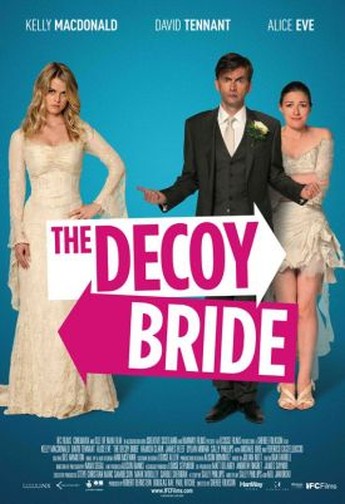 It seemed appropriate to watch this on our 10th wedding anniversary, centered as the film is, on a wedding in rural Scotland. And, besides, it had Doctor Who in it, which is pretty much what attracted my attention in the first place. Tennant plays writer James Arber, who is set to marry film star Lara Tyler (Eve), up until the paparazzi spoil the event. It’s rescheduled, in top secret, on the remote Western Isles island of Hegg, where the population of 79 are largely unconcerned with fame (and where Arber’s best-seller was set, even though he’d never been to the place and Googled all his research). However, when the paparazzi catch up, Lara goes into hiding, and to throw them off the scent, her manager (Urie) opts to stage a dummy wedding, using the only remotely acceptable local stand-in, Katie Nic Aodh (McDonald). If you can’t tell where this is going, you should probably look up the phrase “romantic comedy”, because it’s clearly an entirely alien concept.

Absolutely no surprises or shocks to be found here. But I strongly suspect that’s not really the point: these kinds of fluffy romcoms are never designed to challenge expectatiosn so much as play fervently into them, but at least this one does so with some charm and a pair of good to very good central performances. You want to see James and Katie get together, although the ‘real’ bride is perhaps too nice, which left me finding it hard to wish any ill on Lara either. The movie has a nicely balanced view of life in communities like that, capturing both the negatives (everyone is in your business) and positives (the sense of belonging) they possess, and there are enough familiar faces round the edges to paper over the extreme obviousness of both the plot and some of the jokes. While not a lot here merits a second viewing or any lasting memories, it did the job for the occasion in question, and provided satisfactory snuggle time with my non-decoy bride.