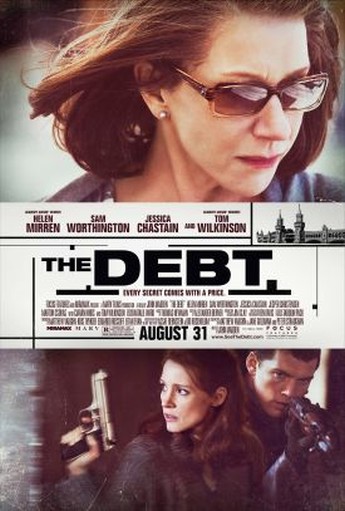 A remake of an earlier Israeli film, this concerns a 1965 effort by a three person snatch-squad to kidnap and abduct suspected Nazi war-criminal Dieter Vogel (Christensen) out of East Berlin, where he has constructed a new life as a gynaecologist. The mission goes bad, but Vogel is gunned down trying to escape, and the trio return to their home country as heroes, having delivered some measure of justice, if not quite by the show-trial for which they hoped. Over three decades later, Rachel Singer (Mirren in the present day, Chastain in the sixties) is about to re-enter the spotlight of publicity, as her daughter has written a book describing the events which took place on that mission. But the apparent suicide of another member of the group alerts Rachel that something is very wrong, what happened in Berlin on that night, may not be quite the heroic deeds which her daughter has reported in such glowing terms. Is it time to reveal the truth before it escapes, even if doing so would destroy the reputation of Rachel’s daughter?

The flashback technique can be problematic in thrillers, because it restricts the outcomes, e.g. you know who lives, but here it works in favor of the film, when you realize that what you were initially told isn’t necessarily 100% accurate. It’s hard to say much more than this – I’m already tip-toeing delicately around spoilers – but Madden does a good job, and the “lightbulb moment” when you eventually figure out, makes it worth trawling through some occasionally confusing early stages. Mirren represents good value as ever, though I’m not entirely convinced that Chastain is the best choice for the younger version; it seems a lazy choice, both having been selected on the basis of previous big hits (Red and Zero Dark Thirty respectively), rather than due to aptness. But the story manages to keep its outcome in doubt until the very end, and when things wrap up, it “feels” true to Rachel’s character, rather than the desires of the audience, and is all the better for it.