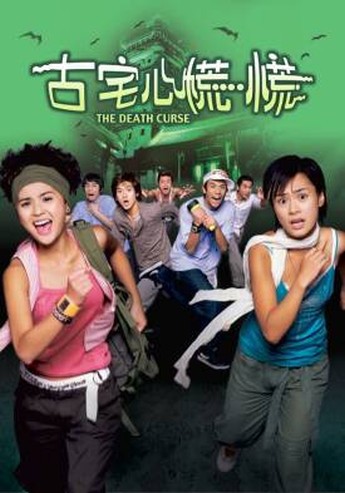 Choi and Chung make up Canto-pop duo Twins; Cheung and the also-appearing Kenny Kwan are Canto-pop duo Boy’z. This is thus perhaps the equivalent of a Hollywood horror film starring Mary-Kate, Ashley and half of N’Sync, so that it struggles to entertain is perhaps no surprise. My disappointment is mostly because the Twins’ first film, Twins Effect [a.k.a. Vampire Effect] was actually a thoroughly entertaining mix of martial-arts and vampires, which rivalled Blade II and surpassed Underworld. Here, it’s a more conventional “eight children return to the house of their dead father to get their inheritance only for weird stuff to start happening” kind of film, and if you can’t spot who the villain is, you need to watch more Scooby Doo.

It doesn’t help that Charlene, the far more irritating Twin, is given the vast majority of screen time, and what I’ve seen suggests Gillian is actually the better actress. She certainly shows more dramatic range; Charlene’s character, Nancy, is very annoying, and does little but pout, whine and run – though the sequence where she gets her foot licked by three men will probably attract more viewers than the film deserves. Director Cheang has a decent pedigree in horror, including the memorably-titled Horror Hotline: Big Head Monster, and generates some creepy moments. However, it’s never long before Nancy is back to pout and whine some more, leaving the viewer firmly on the side of the dark forces.