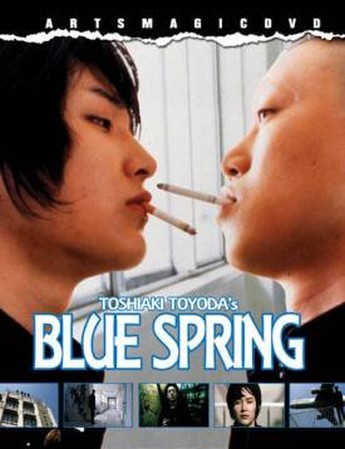 Disaffected youth is much the same all over the world. That’s the main lesson here, where Kujo (Matsuda) becomes lord of his domain, Asahi High School, less through talent or interest, simply because he’s good at the perilous game used to decide who’s the boss. Since he has no real interest in the position – preferring to aimlessly kick a football around, or grow flowers with the school midget – the established order of things starts to fall apart. In particular, Kujo’s apathetic attitude infuriates Aoki (Arai), who abandons his position as Kujo’s “gopher”, in order to stage a challenge to his former friend.

This is an annoying film; while there are any number of great scenes, the director seems uninterested in using them to build a coherent and engrossing movie. Plot threads stick out and fall off without rhyme or reason, in an aimless way I suspect is supposed to mirror the aimless behaviour of the characters, but which I found much more irritating than anything. For example, there’s only one female character in the whole film (it is, generally, an extremely tough and macho piece of work) – her actions, and indeed entire purpose, remain unexplained. That’s a shame, since the individual moments are mostly pretty good, in particular one shot where Aoki stands all night atop the school roof, awaiting Kujo’s arrival. Filmed using time-lapse, it’s one of the most memorable images I’ve seen this year, even if it shows up the flaws in the storyline all the more.