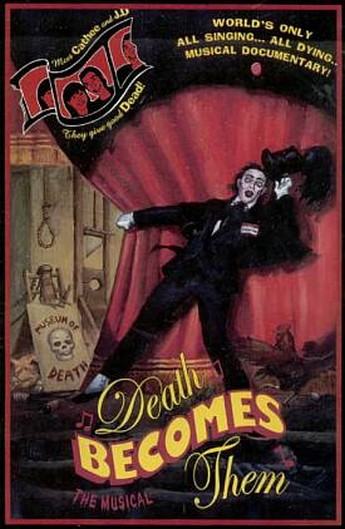 Back when I still lived in the UK, I made a trip to Los Angeles, where Chris and I found the Museum of Death, located just off Hollywood Boulevard. This housed a collection of exhibits devoted to mortality, from a tableau of the Heaven’s Gate suicide, through pics of the Black Dahlia murder, to artwork by serial killers. It was kinda grim, but undeniably memorable – I’m glad we got to visit, as it lasted only a year before the tenants were evicted by their landlord. This film tells the story of husband and wife owners, JD Healy and Cathee Shultz, from their start as a gallery offshoot in San Diego, through their time in Hollywood, to closure and hopes of eventually reopening somewhere. [Not so far, and this film was made in 2003] Oh, and should mention the several musical numbers edited in throughout proceedings – sung by ‘The Undertaker’ (Tucker), and including dancing body-bags, so they’re more fitting than you might imagine.

The odd thing is how much Healy and Shultz reminded us of…well, us – albeit a more extreme version. We do not, for example, keep dead pets in our freezer. The film does give a genuine sense of their characters, which are fascinatingly odd, and while it’s strange to have semi-random stanzas from songs cut in (I’d probably prefer to have had the whole song played), the overall effect is – much like the place they ran – a mix of the creepy and the intriguing. It’s a shame we don’t hear more about the items, as I’m sure there are more stories, like how they ended up with the severed head of French serial-killer Henri Landru. [The head is barely included in the film, and the story only appears as an extra on the DVD.] However, in the end, this is less about the Museum then the people behind it; as such it’s a heartening, and actually rather sweet, story of a couple who make of their lives what they want, and are perfectly content with that, and each other.