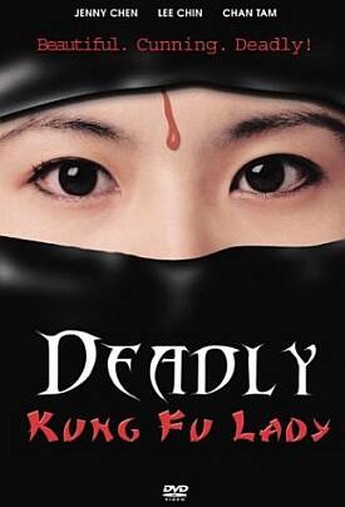 The sleeve deserves a prize for fiction: it credits “Jenny Chen”, “Lee Chin”, “Chan Tam” as the stars, claims “Wong Ka Yan” was the director, and the synopsis starts “A mob boss’s empire…”, then continues to head away from the actual film at warp 7. I suspect they, like the title, were made-up down the line by someone unconnected to the picture; anyone looking for, say, a deadly lady performing kung fu, will be sorely disappointed. However, fans of loopy martial arts like Master of the Flying Guillotine may well find this entertaining regardless. The central character is Lung Fei Yung (Wang Yu), an assassin who kills purely to train himself to eventually fight his parents’ killer.

He gets involved in a struggle for martial arts dominance, that involves a great-deal of double-crossing. More entertainingly, there’s the “death ring”, a flying circular saw that cuts through anything before returning to its wielders’ hand. [I’d be inclined to call this a parable for recent events involving “weapons of mass distraction”, but since this was made in the late 70’s, it’s a bit of a stretch. Still, let’s hope North Korea doesn’t get its hands on any death rings, or it could all get very tricky…] I really give absolutely nothing away by saying all these events connect to our hero’s orphan status, thanks to an X-shaped scar conveniently marking the arm of Lung’s nemesis.

Still, on the way to the inevitable face-off, there’s plenty of dumb entertainment, as Lung fights his way through a plethora of low-level minions, including a fire-breathing guy in a mortuary, or the one who lives underwater and makes pinging sounds like a sonar system. Wang Yu’s spearwork is grand, and there are a couple of nicely-choreographed fights, which showcase the talents of the performers rather than the editor. Of course, much of this doesn’t make much sense (nor do some scenes, even on their own) and will often provoke laughter, yet the plot ties together well, such as making Lung’s girlfriend the daughter of the man who made the death ring. Probably better than I expected, and certainly more fun.