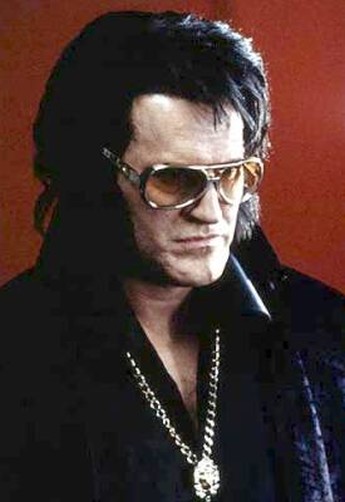 I really wanted to really like this. No, really! An aged Elvis – played by Bruce Campbell, no less – and a black JFK, team up to fight an Egyptian mummy in their old folks’ home? What’s not to like? Unfortunately, this didn’t live up to my hopes, though that’s partly because they were exceedingly high; the film’s origin as a short story remain painfully clear, and at feature length, there’s often not much happening. I could certainly have done without the “growth on Elvis’s dick” subplot, that’s for sure; even offscreen, it’s probably the most horrific thing the movie has to offer

And yet, there’s a lot here to admire, not least the two central performances. Campbell is great, a grumpy old man mourning the loss of “Cilla” and his daughter, but may even be upstaged by Davis, portraying a man convinced his skin was dyed black after the Dallas assassination attempt on him failed. It’s deliciously loopy, and these two characters left me wondering if they shouldn’t have abandoned the mummy angle entirely – as monsters go, it’s not very threatening. Let’s face it, anything which can be battled by two senior citizens, one with a walker, the other in a motorized cart, is not going to strike terror in anyone’s heart. This is therefore a dismal failure as a genre piece; however, it may be a rare example of a film that actually works better as a character piece than as horror.