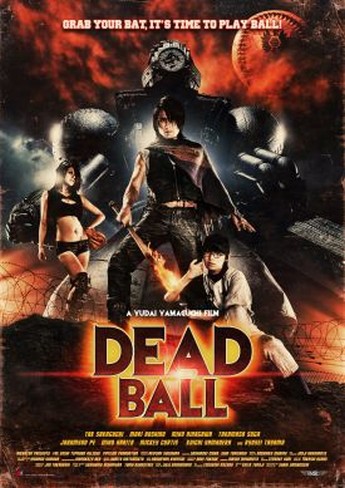 More or less a sequel to Battlefield Baseball, with Sakaguchi again playing Jubeh Yakyu, who has graduated from school to become a juvenile delinquent [part of the joke being that Sakaguchi is now in his mid-30’s, so is playing half his age]. After a crime spree, he is sent to Pterodactyl Hall, where the governess Frau Ishihara wants him to be the star on her baseball team. Jubeh has sworn off the game, since one of his pitches killed his own father, but he is also looking for his brother, who passed through the same facility not long before, so he agrees to lead the team of punks and killers scratched together out of the other inmates. Ishihara has a surprise, announcing their next game is the following day, against the girls of St. Black Dahlia High – who turns out to be an even bigger bunch of psychos than the kids from Pterodactyl. Oh, and Ishihara’s definition of “baseball game” is clearly some way removed from America’s national pastime, with scoring based on the inventiveness of the carnage you inflict on the other team. Play ball!

It’s kinda fun, but not as much as you’d think, in part due to CGI blood which is so painfully obvious, one wonders if this is part of the joke. It has some amusing ideas and moments – we were particularly amused by Jubeh’s ability to pull a lit cigarette out of thin air, when dramatically appropriate. But for every one of these, there’s another moment which just doesn’t work on the level intended, even when aiming about as low as cinematically possible, for example in the cavity searches. There’s little or no sense of progression, and the film swerves off into complete stupidity at the end, with a bad Kim Jong-Il lookalike leading to the most unnecessary final sequence I’ve endured since the end of Return of the King. The overall result is pretty uneven; it just about passes muster, thanks to Sakaguchi’s charisma and a lack of restraint and good taste (bonus points for a Klaus Nomi reference!). However, it’s very much “one and done,” holding little to sustain a second viewing.