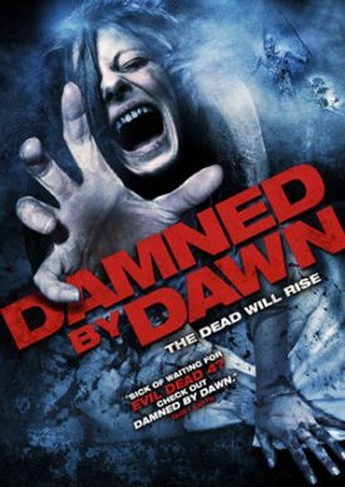 Sam Raimi called: he wants his movie back. That’s kinda the feel you’ve got here, though it’s more an overall impression, vague similarity in setting and a knock-off title than the “anything can happen, to anyone, at anytime” approach from the original Evil Dead. Claire heads back to the family home where her father (Alder) is nursing his sick mother, Dawn [Damned by Dawn… geddit?]. She had sent Claire an urn, with a vaguely ominous message that she would know what to do with it when the time comes. Too much to ask for a clear explanation, then? Dawn does drop more hints, about the Banshee, a shrieking spirit that comes to oversee family members into the afterlife – just as long as she’s not interfered with. Of course, what does Clare do? She interferes. In fact, she pushes the remarkably-corporeal spirit off a balcony, impaling her. Oops! Needless to say, retribution is swift, as the Banshee summons a lot more spirits to lay siege to the house and its inhabitants. Truly, they have been .

I think it was the balcony scene that destroyed the movie’s credibility for me. Up until that point, it was just about skating by on atmosphere, and the Banshee is certainly spooky-looking, her eyes weeping blood after her centuries of sorrow. However, after that moment, the film’s flaws, such as particularly badly-integrated CGI became all the more obvious, and our interest level quickly evaporated – to be replaced by steady, deep breathing in Chris’s case. And that was even before Clare’s father suddenly provided a helpful explanation – which would have been even more helpful, had it occurred before, literally, all hell breaks loose. It’s the kind of idiocy in plotting that might have skated past the viewer a couple of decades ago, if the premise was at least executed with enough energy. Or gore. Or something. Instead, it’s worth noting that the pull-quote on the cover (right) – “Sick of waiting for Evil Dead 4? Check out DAMNED BY DAWN” – is actually from a site that had only seen the trailer. Here’s one they won’t use. “Sick of waiting for Evil Dead 4? Damned by Dawn will remind you why you’re waiting.”