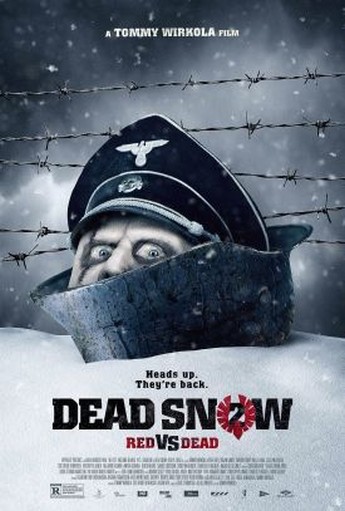 As sequels go, it’s a bit of a mixed bag. In between these two, Wirkola went to Hollywood where he directed Hansel & Gretel: Witch Hunters, which was not a huge success. Returning to his native Norway for this, he certainly amped up the gore and the budget, and there are some impressively excessive kills, which certainly surpasses the first. However, it has also been painfully and obviously Americanized, and that doesn’t work nearly as well. It follows directly on from the original, where Martin (Hoel) was the sole survivor after he and his friends stumbled across a cache of Nazi gold, and unwittingly resurrected a troop of deep-frozen stormtroopers led by Herzog (Gamst). Through a series of unfortunate mishaps, Martin ends up getting Herzog’s arm attached to his shoulder, which gives him the ability to raise the dead too. And he needs it, because the Nazis are on the way to finish their mission, to exterminate an entire town, and the only way to stop them involves resurrecting a similarly deep-frozen troop of Red Army soldiers, executed by Herzog’s men late in WW2, and so who also have unfinished business with the Nazis.

Damn, that’s marvellous stuff, and if they’d stopped there, it would have been a classic. Unfortunately, Wirkola also contrives to bring in the “Zombie Squad”, three American nerds led by Daniel (Starr), who have been waiting their entire lives for this. It’s a trio who bring virtually nothing to the film except for embarrassingly bad comic mugging, and instead, proceedings come to a grinding halt just about every time any of them appear. It has been a long while since I’ve seen a trio of supporting characters who are so superfluous, and it’s a shame, since there’s plenty to enjoy when they are not on the screen. The rest of the movie occupies an enjoyable location, somewhere between early Peter Jackson and Edgar Wright, combining OTT gore and spectacular demises with black comedy and endearing characters, for whom you want to root: have to say, Martin copes rather better with getting an arm from a resurrected Nazi officer, who had been dead for 70 years, than I ever would. Naturally, the ending is open for a sequel, and just as long as the geeks do not inherit the Earth, I wouldn’t mind another flurry of Snow.