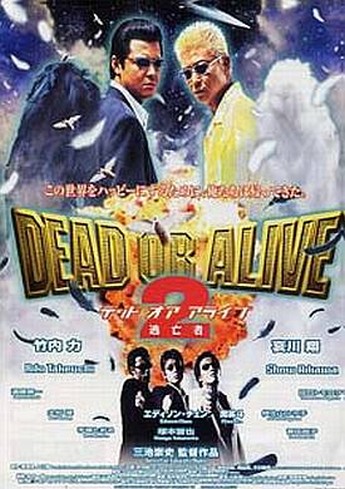 Right from the off, it’s clear Miike is going in a totally different direction from the original. [Mind you, after the way that ended, he pretty much had to.] About the only connection is the two leads, who here play childhood friends, reunited by murder. They hide on their home island, reliving their youth, and meet an acquaintance who never made it to the big city. Eventually, they return, becoming assassins who donate their fees to third-world charities – literal angels of death, complete with fetching black/white wings. Of course, it all ends badly, though neither of our heroes seem particularly upset about it.

If the first part was Miike’s version of Violent Cop, this one follows Beat Takeshi’s Sonatine, with a lyrical, laid-back approach: urban gangsters in a rural setting, rediscovering their inner child, before blowing it away. After an amusing opening cameo by Tsukamato, who re-enacts mob warfare using cigarette packets, this is perhaps too laid-back for its own good, occasionally bordering on the soporific – the subplot involving a kids’ play definitely overstays its welcome. There are moments of genuine brilliance, such as the rival trio of hitmen who find their target, then stand around, text-messaging each other on their mobiles, debating whether he’s the right guy. However, such inventiveness can’t save material which largely feels stretched beyond its limits.