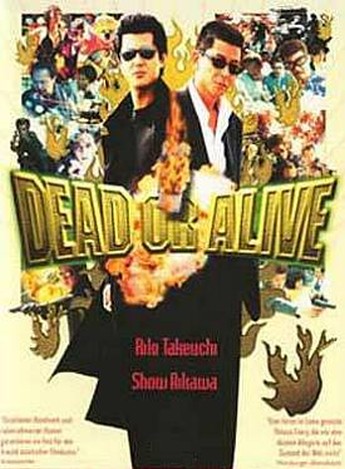 The first and last five minutes are simply phenomenal. It opens in a trailer-like blizzard of sex, violence, violent sex and sexy violence that is perhaps the most amazing start to a film I’ve ever witnessed. It finishes in another “you have to see this!” sequence which makes me wonder how the hell they managed to make two sequels. While it may be no surprise that the middle ninety-five minutes can’t quite match up (nor is it a bad thing perhaps, as I fear my head would have exploded), it is something of a shame that the movie is, at heart, just another Yakuza-cop faceoff, familiar to all fans of Beat Takeshi.

The cop here is Jojima (Aikawa) and the gangster Ryuichi (Takeuchi), who operate in a depraved world, with their own twisted, yet somehow fetching, code of morality. For example, Jojima needs $200K for his daughter’s medical bills, so blackmails a gang boss for a loan. That’s about it for characterisation (yet is the work of Thomas Hardy when compared to the female characters); Miike seems to delight in throwing characters on screen, where they’ll do something strange and totally irrelevant, before being shuffled into the background once more. It’s totally infuriating and brings the film to a grinding halt, but when he’s “on”, the results are so good as to make everything else forgiveable.