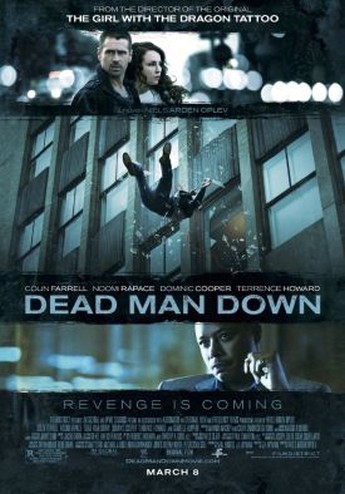 The director of the original Girl with the Dragon Tattoo heads for Hollywood, taking the star with him. However, there’s a gap between the small-scale thriller and a $30 million action-flick of very little brain, which Oplev finds difficult to bridge. It’s not often in this kind of movie that the performances are the best thing, but is probably the case here. Admittedly, we start with some casting best described as “geographically confused”. The Swedish Rapace plays Frenchwoman Beatrice (her mother is played by an even greater Euro-icon, Isabelle Huppert, a 14-time nominee for the French version of the Oscars, the Cesars), while the Hungarian Victor is played by the very Irish Colin Farrel. Both have revenge on their mind. The former, for a car-crash which left her disfigured – lightly, in a nicely Hollywood way – the latter aiming to take out mob boss Alphonse Hoyt (Howard), responsible for killing his wife and child. The two quests intersect, with the pair building a relationship as they alternately assist and interfere with each other’s vendettas, as necessary to the plot.

That last clause is perhaps the problem: it seems that a lot of things here happen simply because they need to for the purposes of the storyline, not because they flow organically from events. For instance, there’s a tense scene where Hoyt and Victor face off, and it seems Hoyt has figured out who is behind the deaths affecting his organization. Except it just ends, and the next scene has Victor continuing as if absolutely nothing had happened. Meanwhile, the scheme he devises for vengeance definitely falls into the category of “needlessly complicated,” including kidnapping, the sending of photo fragments to his target, and saving his victim from death, when he could just have stood back and let him get gunned down. The only thing which keeps this watchable is the interaction between Beatrice and Victor, both damaged and disconnected souls. Both Farrell and Rapace deliver performances which deserve a much better movie than the lame B-grade action flick in which they are embedded here.