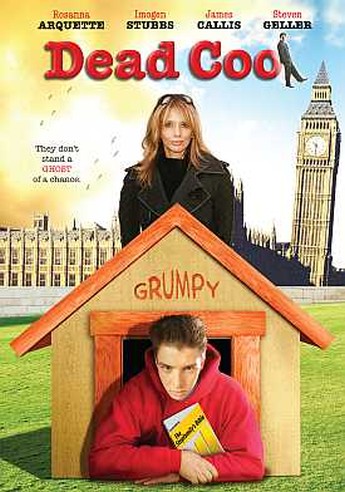 Though years have passed since his father died, David (Geller) is still reluctant to accept Mark (Calf), the new boyfriend of his mother (Stubbs). This is in part because the ghost of his dad still pops in to see him occasionally, and is no more enamored of his replacement than David is. When Mom and Mark decide to move in together, thereby also amalgamating their two families, how will David cope? And, indeed, how will his mother cope with the presence of Mark’s ex-wife (Rosanna Arquette, whose presence on the sleeve significantly, if understandably, outstrips that in the movie), a self-help guru and MILF who lives just down the street? While I enjoyed the performances here, the script never managed to get enough focus to put it all together. It kept throwing ideas up in the air, such as David’s struggle with his Jewish heritage, and then dropping them without resolution.

Indeed, the whole spectral aspect is similarly, only wheeled in sporadically, and that’s a pity, as the idea of an invisible dad keeping an eye on his teenage son is not short in potential. However, Geller takes an awkward character to empathize with [it’s my firm belief that all children are possessed by a demonic entity between the ages of 13 and 18] and brings David to life: you may not agree with his actions, but you can see where he’s coming from. I found the rest of the cast somewhat bland, though veteran Liz Smith effortlessly steals every scene she’s in, playing the family’s granny. I enjoyed the use of London locations, yet this isn’t really my cup of tea. That’s probably because I’ve been on the receiving end of teenagers bickering with their parents too many times, for it to be the kind of thing I really want to watch again for entertainment.