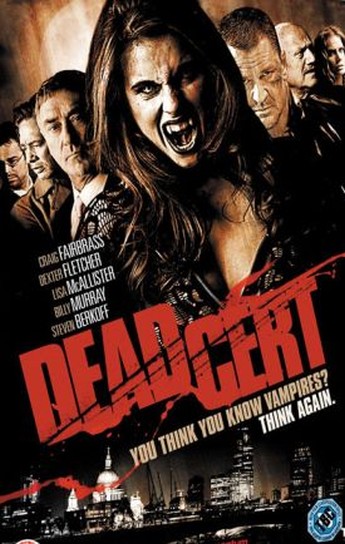 Or, Cockneys vs. Vampires if you want the high concept. Fairbrass plays ex-gangster Frankie Frankham, who has just succeeded in opening his dream business, gentleman’s club ‘Paradise’, on some land which he had to prise out from under loonie squatter, Kenneth Mason (Berkoff). No sooner have the doors opened, however, than a cartel of Romanian business people, led by Dante Livienko (Murray), make him an offer he can’t refuse. Three million pounds against the club, in a winner-take-all bare-knuckles bout. Not only does Frankham lose, his champion and best friend is killed in the process. It turns out the loonie squatter was not insane: the land was the ancestral soil of a vampire tribe, whom Mason was keeping at bay. With him evicted, Livienko and his blood-sucking cronies are back, and their ambitions don’t stop at the club, now known as ‘Inferno’. Hohoho.

Despite a decent cast, which at times almost appears to be going for a Lock, Stock re-union, this never has the courage of its convictions – for instance, it’s the only strip-club in London without any actual nudity, though I guess this does explain why there are never more than about eight customers in there [oh, hang on: my mistake, that’s a result of the low budget], and Murray is so non-Romanian he probably couldn’t even spell “Nadia Comaneci.” If the underlying idea is good, and Berkoff memorable in a role, for which you can imagine Peter Cushing having been awesome in the 1970’s, it feels like the makers lost interest after assembling the cast and crew. Perhaps the original plan was a gangster film, then someone saw From Dusk Till Dawn and a light-bulb went off in their head, telling them it’d be a great idea to add vampires. Because everything is better with them, right? ‘Fraid I’m going with a dissenting opinion on this one, which is not exactly going to be remembered as being among the new-wave of British horror.