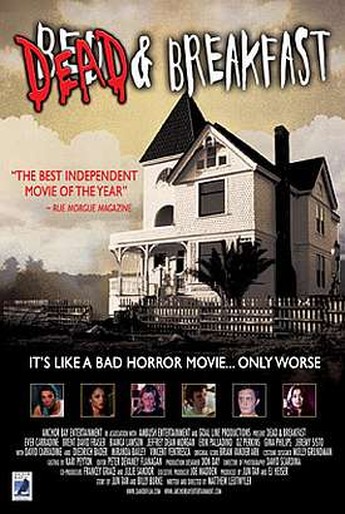 Six students are on their way to a wedding when they get lost and end up in the town of Lovelock. They opt to stay in a local bed-and-breakfast; during the night the chef is found murdered in the kitchen, and the town’s police chief forbids them to leave town until things are cleared up. Suspicion for the crime falls on a mysterious drifter (Frase) carrying an occult manuscript. However, that’s far from the only dead body to show up, since the B&B’s owner soon follows – much worse is to come, as it appears the dead are not staying dead. Turns out a vengeful spirit has been accidentally released by one of the visitors, and has turned the locals into murderous zombies, who lay siege to the bed and breakfast. Can those trapped within repel the attackers and work out how to send the ghost back to its rightful resting place in the afterlife?

The main problem when you fill your movie with references to other films is, they’re usually better than yours. Here, the impression you’ll take away is a desire to watch The Evil Dead, Brain Dead or even Michael Jackson’s Thriller video. The best horror-comedies – Re-Animator, Shaun of the Dead – work because the characters are entirely unaware of the humour. Here, you know the makers are on thin ice when one of their characters says, “This is like a bad horror movie.” Acknowledging it doesn’t make it any less true, y’know, and too much of the comedy falls on the dumb physical side. That said, there are some nice touches here – the C&W singer who provides a Greek chorus of comment on the action, and there’s no denying the copious volumes of gore which covers the screen. However, there’s just a sense that it’s trying too hard; again, comedy-horror needs to flow naturally, and this often seems just too forced to be able to succeed as a whole.