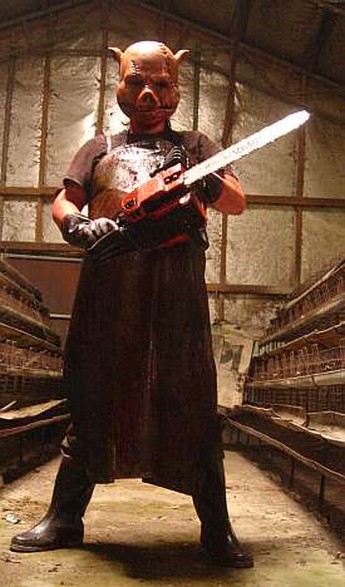 We do not often use profanity here at Trash City. Not because we object to it: indeed, in everyday life, our dialogue is as salty as anyone else’s. It’s just that I tend to think the more you curse, the less effect it has when you do, and so we’d rather save the impact for when we need it. The preface is necessary, so that when we say this movie is some fucked-up shit, you’ll know we aren’t messing about. It’s basically torture-porn taken to its logical extreme: shot entirely from the POV either of one of the three killers, or the camera strapped to one of the four victims’ heads. They are tied up in a shed at a remote farm, and taken off one at a time to be dispatched on video. Things get somewhat more complex when the film-makers discover two of their victims are married to each other. The husband is promised release, first if he can withstand ten minutes of whatever the assailants can do to him, then if he can come up with a new and imaginative way to dispatch his wife. Mind you, putting your trust in anything said by those who are making snuff movies might not be the wisest move.

It’s a very hard film to watch: Chris bailed after 15 minutes, feeling physically ill. Not due to the content – that hadn’t even kicked in – but because the camerawork was inducing motion sickness. After about forty minutes, I was seriously wondering whether there was a point here, though there’s no doubting the unease generated by watching someone get taken away, then hearing the sound of a chainsaw and screaming. Things do improve somewhat once the husband is given some choices to make, provoking some discussion with Chris [from the other room], as to what I would do in the situation. My advice to any husbands out there who get asked the same question: pretend not to have heard. Trust me, it’s for the best. 🙂 The sole point of tension in the question of whether the victim will or will not escape, and the unrelenting brutality eventually becomes numbing: it’s like having someone shrieking in your ear for 75 minutes. No, strike that. It is having someone shrieking in your ear for 75 minutes.

You will certainly not have seen anything quite like this before. Even the infamous Flower of Flesh and Blood infused its gore with a certain philosophy and personality. Here, the closest you get is one of the killers talking to his mother on a cellphone: “It’s just the radio,” he says, to explain away the background noises. However, the techniques of cinema developed for a simple reason: they work. Stripping them away in their entirety, while producing something closer to raw experience, dilutes the impact significantly. To quote Stephen King, “I recognize terror as the finest emotion and so I will try to terrorize the reader. But if I find that I cannot terrify, I will try to horrify, and if I find that I cannot horrify, I’ll go for the gross-out. I’m not proud.” Kim opts to bypass the first two categories entirely, and while the results may work on that level, I can’t say I was particularly impressed. Any evidence of cinematic talent beyond physical FX is difficult to see, and the point being made here is equally obscure. If I’m glad to have seen it, I have absolutely no interest in ever seeing it again.