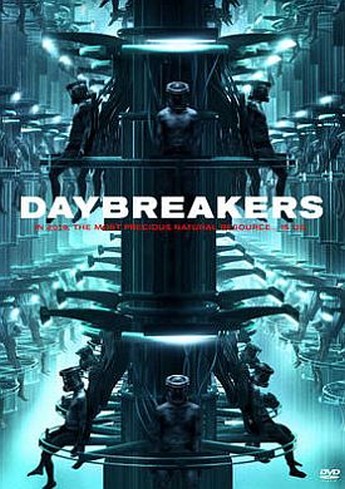 An imaginative stab at the vampire mythos, this is set ten years after a bat-transmitted pandemic has turned the vast majority of humanity into vampires. However, the dwindling number of true humans are insufficient, even when most are farmed for their blood, and any others fair game to be hunted. The resulting food shortage sends society towards collapse, and haematologist Edward Dalton (Hawke) desperately works, in the labs at pharmaceutical company Bromley Marks, to invent an artificial replacement. By chance, his life intersects with a group of free humans, led by Elvis (Dafoe), a former vampire cured, by chance, after experiencing something normally fatal to his kind – exposure to sunlight. Can he convince Edward of its credibility as a solution to the looming anarchy, and if so, can Edward then convince his boss, Charles Bromley (Neill), especially as he might have his own plans to exploit the chaos?

One senses a fair amount of thought has gone into this. It’s an interesting twist to have a world where the vampires are not the minority but have become the master race, and its the humans who are forced onto the edge. What happens when the vampires don’t get their blood isn’t pretty: they degenerate into “subsiders,” feral animals like Nosferatu on crack, and the Spierig’s don’t stint on the gore either. However, the film does run out of steam substantially in the middle section; once it has set up the scenario, it doesn’t do enough to develop things from there. Hawke is somewhat too bland to succeed as the hero, though it’s amusing to see Dafoe as a recovering vamp, remembering him from Shadow of the Vampire. If, overall, this feels more like a pilot for a TV series, it’s one I’d be interested in watching.