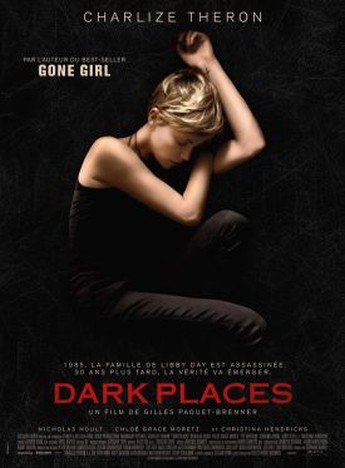 25 years after being the only survivor of a murderous night which killed her mother and sisters, Libby Day (Theron) has just about spent all the proceeds of her fame. She accepts, for a fee, an invite to meet a group of amateur investigators who call themselves “The Kill Club”, some of whom believe the person convicted as the killer is innocent. That person is Libby’s brother, Ben (Stoll), who has spent the past decades in prison, without ever filing an appeal, with the general consensus being he was involved in Satanic worship of some kind or another. Libby’s memories of the night are fragmentary, but as she begins to piece together the elements of what happened, she gradually realizes that her brother may not be the perpetrator; it may just have been best for all concerned if that was the conclusion of the investigation.

I dunno, maybe I’d be more impressed if I’d read the book, which comes in with a glowing reputation; “By the author of best-seller Gone Girl” trumpets the poster. As is, I can’t say the actual resolution is sold with enough conviction, coming over as something Agatha Christie would probably have discarded in an early draft. Difficult to say much more than that, without spoilering, but I can say, of the two elements required, one is so barely sketched, the makers might as well have had a giant foot come down from the sky and squash Libby’s mother. The other is better drawn, evoking hints of the West Memphis 3 and the ‘Satanic Panic’ of the time, where being weird could lead you to be suspected of murder – or, as the film depicts, worse. Libby’s amnesia for the events of the night is a little too convenient, and the Kill Club basically vanish after being used to set the plot in motion. The performances are decent enough, Theron again having to dress down severely for the part, and doing so effectively. If only the story was as effective at concealing its flaws, as she is at concealing her beauty.