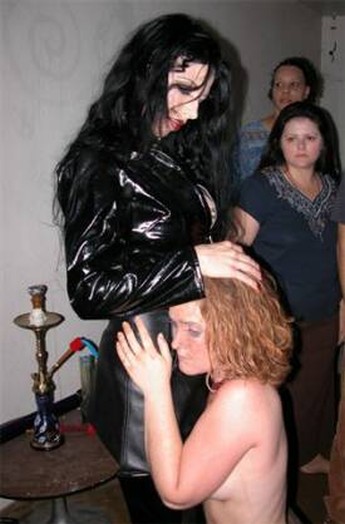 While not an unqualified success, there are a number of interesting ideas floating around here – the main one being that you’re never sure what is “happening”, as opposed to being the product of the heroine’s deranged imagination. For Keri (Hawkins) is a homeless street hooker who, desperate for a place to stay, ends up at the house of Luther (Hayes) and Lilith (Devil), a pair of creepy dudes whose residence is a flophouse for all manner of lost souls. However, she soon finds out this is not quite a charitable institution, and discovers some highly malevolent things going on. When she witnesses what seems to be murder, she makes a break for it: but will she be able to escape? And perhaps harder still, how can she get anyone to believe her lurid tale of ritual sacrifice?

This is an ambitious and laudable step forward, largely aiming for disturbing imagery in favour of the simple gross-out: this is a double-edged sword, because the former is much harder to pull off. Crawford manages the low-level creepiness fine, helped by an effectively sparse electronic score, but the attempts to crank things up are less successful, because we’re given no real reason to like the heroine. While Hawkins does well, in addition to Keri being a crack whore, she’s a mainly passive character: even as she’s being brutally violated by Lilith, the audience feels not particularly much, This may also be because this could just be a delusional nightmare: it’s hard to commit, when a character might wake up at any second.

I’ll not say whether Keri actually does so at the end. The film initially looks to leave that up to the viewer, then cops out with the kind of moment you’ve probably seen too often before. It’s a disappointing ending, but the film as a whole is a credible stab in an interesting direction. There’s more visual style than expected, with Phoenix looking suitably generic – I presume the aim was for Anytown, USA – yet this also possesses the lurid, neon-lit feel of a pepperoni-induced nightmare [and as I write, at 4:25am, post-pizza, I am well aware of what that is]. Despite the odd mis-step, it shows promise and suggests a new direction of much potential for future Brain Damage output.