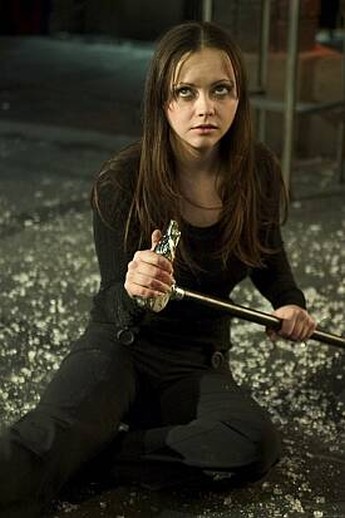 Ginger Snaps was a sharp, savage, witty update on the werewolf genre, dragging it into the high-school setting. Unfortunately for Cursed, it lies closer to Teen Wolf than Snaps. After a car accident and an encounter with a strange beast, two siblings (Ricci + Eisenberg) find their lives, bodies and personalities all changing – in some ways for the better, but generally not seen by them as an improvement. He can now stand up to the jock bully who makes high-school life a misery; she finds her life as a publicist on a TV chat show infinitely more complicated. Between them, they have to locate the source of their infection, break the bloodline, etc.

The problems in production are well-documented, Craven and writer Kevin (Scream) Williamson, all but disowning it, and unquestionable hurt the end product. Hard to say where fault lies: that the final version ended up cut to PG-13 certainly can’t have helped. It seems to aim for an ironic tone, but when the height of wit is a werewolf giving someone the finger – okay, I laughed – there are clearly major problems. It steals shamelessly from other, better films; our hero waking up naked in the bushes was funny 25 years ago in American Werewolf. [You’d think Rick Baker, who worked on both, might have pointed this out, but he was probably too busy cringing at the ropey CGI used here.] The idea of a werewolf invading corporate culture has some potential, and there are occasional effective moments; however, not enough of them. I guess the aim was to do for lycanthropes, what (the vastly over-rated, IMHO) Scream did for slashers. They failed.