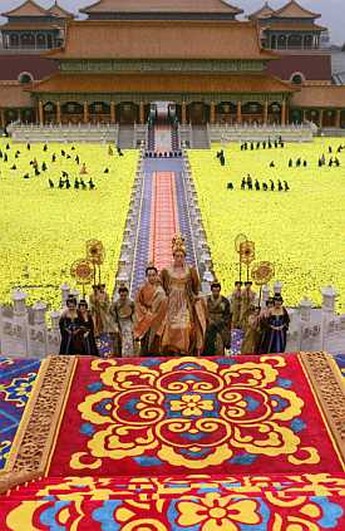 Rarely has there been a film with quite so much marching down exquisitely-decorated corridors, dressed in impeccably-costumed clothes. If that’s your idea of a cinematic treat, you’ll be in heaven with this tale of palace intrigue set a thousand years ago: the Empress (Gong) is plotting to put her stepson/lover (Chou) on the throne, in place of her husband (Chow). The target is far from naive, and is meanwhile embarking on his own plan to make sure that power stays in his hands, at least until he is ready to relinquish it to the successor of his choice. Think of it like a Chinese version of Macbeth, though Zhang’s vision is unquestionably epic.

Zhang directed a version of the opera Turandot, in Beijing’s Forbidden City, and I sense that’s what he was aiming for here. However, there is only so much corridor-stalking I can stand, even when it’s accompanied by the pursed expression of Gong Li – the novelty value of seeing Chow Yun-Fat with a grey beard and a malevolent expression soon wears off too. The second half does contain some splendid battles, that almost redeem things; however, it’s hard to work out who were are supposed to be empathizing with, and Li’s performance is buried beneath so many distractions [the hair! the make-up! the clothes!], it doesn’t engage. Just as some opera ends up looking like sofas are being re-arranged, so this eventually become an empty, if visually lavish, spectacle.