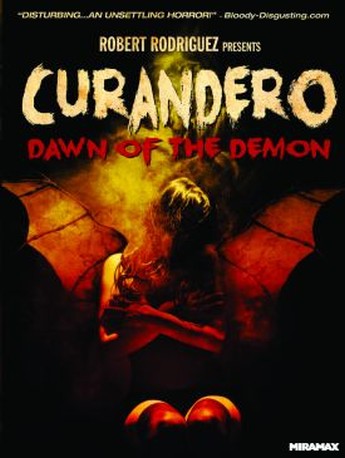 I dunno. Maybe it’s me, and this makes more sense if you’re aware of the strange bedfellows mix of occult magic and Catholicism on which this is based. I know it is a Thing down in Mexico – look up Santa Muerte if you want a good example – but there just seems to be too much here which is not explained for a non-native audience. I get that Carlos (Gallardo) is the son of a renowned “curandero” or shaman. I get that, against his better judgment, he is roped in by federal agent Magdalena (Galatea), to help recapture an even more powerful mystic, Castaneda (Pingarron), who vanished from a locked cell, leaving the walls wearing a fresh coat of red. Beyond this? It’s all questions, such as why Magdalena suddenly turns into some kind of demonic, bipedal goat with a taste for flesh? Or how Carlos, with the help of his dead father’s ghost, is able to take on Castaneda? These things will remain forever obscure and mysterious, since the original screenplay – actually by Robert Rodriguez – deems them obvious enough as apparently not in need of any significant explanation.

To some extent, the film deserves the benefit of the doubt; after all, my ignorance is not either Rodriguez’s problem. However, I can only review films based on my own experience, and tend to think where they are dealing with fairly esoteric subjects, they should not assume significant knowledge on the part of the viewer. Because, as we see here, that kind of assumption can lead to a severely off-putting experience, where you spend the entire second half wondering what the hell is going on, as well as why, and not caring a damn due to this. Rodriguez has a nice eye for the visual side, using a washed-out palette effectively, though the use of jump-cuts to brief inserts of horrific content is way over-used, and there are also times where the creature effects are embarrassingly rubbery. However, the scene where Castaneda saunters into the police-station, apparently invisible to everyone save Carlos, to taunt his adversary, is wonderful, truly showing the potential this could have had, depicting a world where you can’t trust anything you see. Shame it opts for latex masks and cheap scares instead.