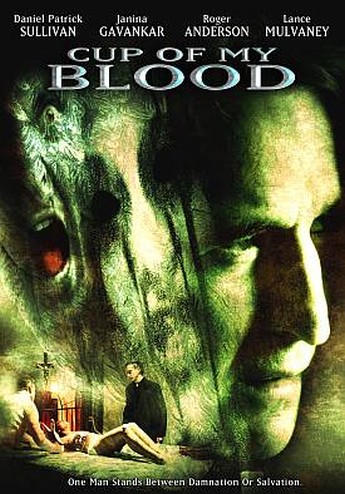 It’s nice to see a horror film with a brain in its head. Indeed, if this movie has a flaw, it’s that it tries to cram too much in: I mean, you’ve already got the Holy Grail, f’heavens sake, what else do you need? This acts as an interesting counterpoint to The Da Vinci Code, where the Grail was a metaphor – here, it’s the actual cup used by Christ at the Last Supper. The artefact ends up in the hands of Jack (Sullivan), a one-time art photographer, now doing smut shoots for a porn site after his girlfriend’s death. Why has the relic found him? Who are the figures lurking in the shadows? What’s the truth about SecondCuming.com? And is his encounter with the mysterious Iona (Gavankar) merely coincidence?

Like I said, a little too much going on here, and it does get bogged down in its own psychological talkiness, especially early on. When it concentrates on the conspiratorial angles, however, it’s excellent, capturing a sense of dread paranoia perfectly. The opening five minutes are superbly creepy, and the finale ties up everything nicely, with a hefty body count and some impressive gore. Indeed, the effects, both physical and visual, are effective throughout, complementing the film without overpowering it. It’s also surprisingly faith-friendly, and a rare case of integrating the Internet (fairly) well into a storyline. Sullivan makes a solid troubled hero – he reminded me of Campbell Scott – and despite the clunky title, I want to hear the DVD commentaries, and find out what lies behind it. Probably a secret Hollywood arm of Opus Dei…