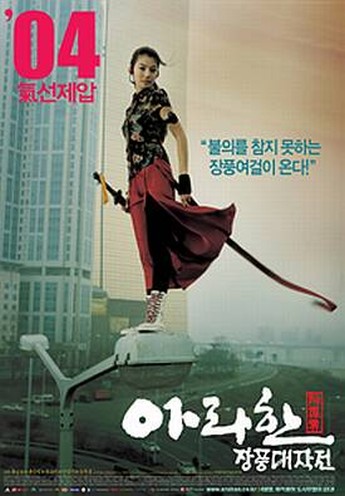 Sang-Hwan (Ryu) is a cop. Not a particularly good one at that. However, his untapped potential is enormous, and is realised when he survives a mis-directed palm blast from Eu-Jin (Yoon). She’s a student of the Seven Masters – now reduced to five, and who hold the key to, oh, world domination, probably – and after he receives a vicious beating at the hands of some thugs, he, too signs up. However, the evil nemesis (Jung) whom the Masters locked away has now been set loose, and is keen to find the key for his own neo-fascistic ends. You don’t need to be a weatherman to know which way the wind is blowing in this particular storyline.

It’s a lovely concept: how do kung-fu masters survive in a world where their talents are now all but useless? However, despite such delights as a TV show called ‘Find the Master’, this angle is never fully explored: that’s a shame, considering the first half, in particular, is somewhat sluggish. Sang-Hwan is a nice contrast to the usual hero, but gets whiny pretty quickly, and his character development is pretty sluggish, especially since we know exactly where it’s going. However, the action is finely handled – even his training battles against Eu-Jin, shown in split-screen, are worthwhile and without the frenetic editing often seen. You genuinely believe the stars can actually fight that well. Several laugh-out loud moments, entertaining characters and super-powered violence are all present here. Who needs any more for a fun time?