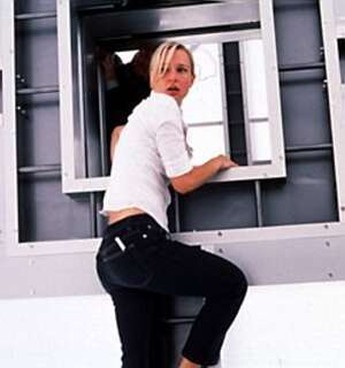 Why bother making a sequel, when you can just churn out the same film? That seems to be the motivation behind this which does exactly the same as the original: throws a disparate group of people into a lethal geometric structure, and let them try to figure out what’s going on. Only this time, it’s a four-dimensional cube… Must be better, right? Read that last sentence with as much sarcasm as you can muster. In every way, this is either a lame clone (most of the characters are almost exactly the same) or markedly inferior – where did all the cool traps and gadgetry go? They were among the imaginative highlights first time; all we get now are an obscure whirling pointy thing, and other examples of shoddy CGI.

The other facet which made the first entrancing was watching the victims try to find a way in which they could beat the system. Against this background, the tension within the group was an essential counterpoint; could they escape before killing each other? Here, there’s just the tension; no-one makes much effort to discover the rules, they wander round blindly, hoping to stumble across the exit. About the only addition is some information about the world outside; it’s safe to say that this brings little to the movie, and you wonder why they bothered. Indeed, I’d be inclined to say exactly the same for the entire production. One trusts that Cube 3 will involve the fifth dimension, with everyone involved vanishing up their own arses, and not bothering us again.