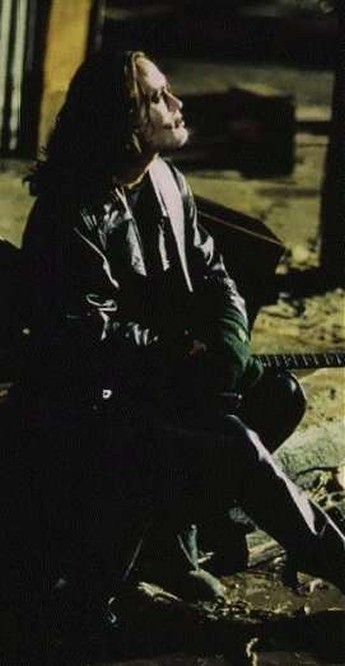 It’s hard to separate Brandon Lee’s character Eric Draven from the actor, with both suffering tragic and early deaths, and this hangs over much of the movie. The creepiest sequence is probably watching Draven claw his way out of the grave, knowing that later on, Lee would be shot on set and die. This lends the scene – and much of the film in general – a hair-raising quality. That they finished the movie at all is remarkable; even more amazing is that you’re hard-pushed to see the join, and the end result surpasses both sequels, which had the benefit of a leading man who didn’t shuffle off this mortal coil in the middle of production.

The story is simple, but effective – not many films start with the lead character already dead. Here, Draven is allowed to return from the afterlife in order to wreak vengeance on his killers, who also raped and murdered his fiancee. Gradually working his way up the food-chain brings him into conflict with Wincott’s uber-thug, who is largely unprepared but has much more experience on the mayhem front. This is dark and broody – the ultimate Goth-pic, perhaps, and lo, there’s a Cure song on the soundtrack. Small child Davis, while probably necessary to fill in the blanks, is still irritating (her first and last movie, fortunately), but Wincott makes an excellent villain. This is Lee’s film, however: even in his computer-generated, stand-in and cutting-room floor incarnations, there’s no doubt he had screen presence, and was better than the low-budget chop-socky films he had largely made previously. How much further he might have gone, we’ll never know…