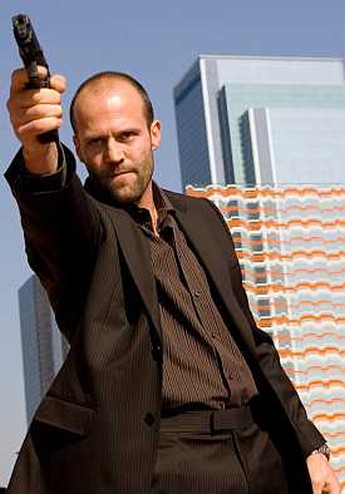 Chev Chelios (Statham) wakes up, feeling not well. That’ll be because he’s been injected with the “Beijing cocktail”, a drug that will kill him, unless he can keep his adrenaline levels high enough to counteract the poison. While he thrashes about Los Angeles, trying to find the antidote, he also is out to get revenge on the gangsters who inflicted this one them, and tell the truth to his girlfriend (Smart), who believes he is actually a video-game programmer. Which is, of course, about as plausible as everything else in the movie: I think the moment that became clear was when the use of a defibrillator catapulted the hero across a hospital into an elevator. Like they do. Or maybe it was when a waffle-iron is similarly adapted to adrenalin-generating purposes. Or the public sex scene. I guess running on the spot just wasn’t good enough – or, more likely, not extreme enough.

For unfortunately, the directors, come from the pop-promo school of cinema, with a course for extra credit apparently taught by Tony Scott, as they feel the need to jazz things up visually, with an assortment of “cute” – quotes used advisedly – visual tricks. A good action film doesn’t need this, and I’m hard-pushed to think of any examples, save Run Lola Run, where they actually work to the film’s advantage. Here, they’re an irritant, though may be needed to distract from the “Hang on a moment…” thought that will run through your head constantly. Statham is, however, as watchable as ever: he has the charisma which made The Transporter a guilty pleasure, and potential to become the biggest action-hero since the heydays of Stallone and Schwarzenegger. However, a better choice of vehicles is recommended: this plays like an amphetamine-crazed version of D.O.A., and that’s not necessarily a good thing.