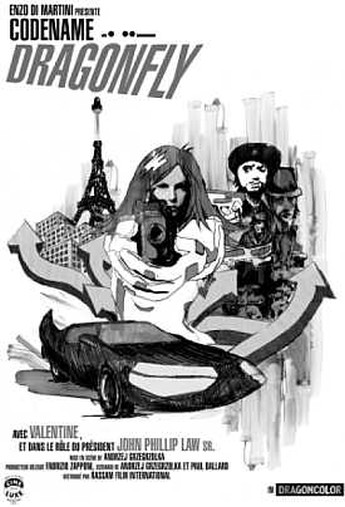 I have to say, I suspect this would never have got made or released if not for the director’s last name. It’s very self-indulgent, with the central, film-editor character (Davis) clearly a stand-in for Roman, as he is asked to take over sci-fi project Code Name: Dragonfly – with more than a hint of Barbarella – which the fired director has turned into a political statement, and turn it into something commercial. Meanwhile, his relationship with his girlfriend (Bouchez) is failing, he’s falling for the star (Lindvall), and his reality is getting blurred with the movie he’s making. The main problem is, it fails to go anywhere significant. Filming ends, the film is completed and…not really much has happened, except for the departure of his girlfriend, an utter blessing, since she’s such a whiny bitch, no-one in real life could have put up with her for more than five minutes.

What the film does, extremely well, is capture the spirit of the late-60’s, with a pitch-perfect period setting, and an amusing look at the hopes and aspiration of the future; Dragonfly is set in 2001, yet the depiction of that year is laughably-wild as to be among the film’s best features. Indeed, I found myself enjoying the film-within-the-film rather more than the film itself: Danger: Diabolik is another clear influence, and Lindvall has a certain Milla Jovovichesque quality (it’s probably the eyebrows) that merits further study. You might want to save time and just watch the complete Dragonfly film, available by itself as an extra on the DVD, as that’s where the entertainment value is to be found here. Still, pays to remember that Dementia 13 wasn’t so hot, either.