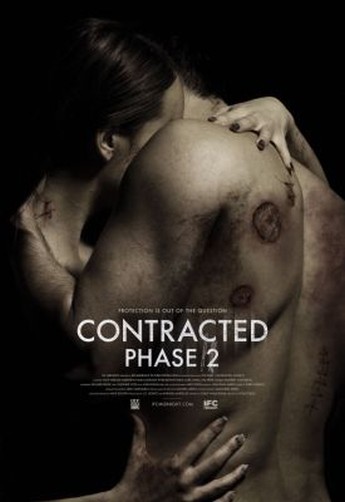 The story for this sequel starts off immediately after the climax of its predecessor, in which Samantha’s condition had degenerated to the level where she was no longer human. It follows the efforts of Riley (Mercer), who made the potentially fatal mistake of having sex with Samantha, and now finds his own body going down the same path of decay and self-destruction. His only hope is to track down the mysterious BJ (Brown), the apparent patient zero who infected Samantha, yet appears to be demonstrating no symptoms; has he found a cure? The LAPD, led Det. Young (Palka) are also keen to find BJ, realizing that they are teetering on the edge of the zombie apocalypse. For it turns out that BJ is not just the epicentre of the outbreak, he is actually its deliberate agent, spreading the disease to further his own agenda.

If competent enough on the technical front, it never manages to engage on any level, generating only a few cheap squirms, such as a sequence involving a contact lens which certainly made me glad I don’t bother with them any more. As a character, Riley is no more memorable than he was in the first film, and poor characterization is perhaps even more of an issue here than it was previously. It doesn’t even offer the dubious pleasure of untangling a slew of murkily questionable issues of sexual & body politics from the first, offering instead little more than a straightforward “catch the loony” thriller, albeit with an additional helping of maggots. The shift from the first film’s intensely personal focus to a broader landscape make this indistinguishable from other “In the beginning…” sagas, most notably Fear The Walking Dead, with which this also shares an LA setting. If the original ended in a way that certainly pointed to a sequel, this endeavour has the feel of something hastily thrown together to fill a demand for product.