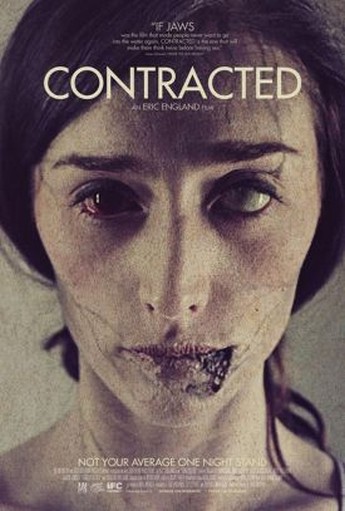 After a drunken one-night stand at a party, Samantha (Townsend) is plagued with the usual feelings of guilt, not least because she’s supposed to be lesbian, and cheated on her kinda-girlfriend, Nikki (Katie Stegeman). But these are soon pushed aside by more purely physical concerns, as Samantha becomes increasingly plagued by sickness. Initially, she writes it off as a hangover, but as things develop, she becomes increasingly concerned she may have caught something from her fling. Making things worse, she hears the man in question is being urgently sought by the authorities. Her doctor thinks she just has a bad head cold, but it becomes clear that Samantha’s problems are far beyond that, with her teeth and fingernails falling out, and her eyes… Well, those sunglasses are pretty much a necessity, and there is also an issue with maggots which does not indicate the best of health. How much worse are things going to get, and is there any way to stop it?

Englund has a much better handle on the Cronenbergian body-horror aspects here than his characters, and watching Samantha disintegrate – both figuratively and literally – is a deeply unnerving experience, like watching Seth Brundle metamorphose in The Fly. Though here, you have little or no idea of where this is going to end, or even if it will [at least until one of the most chilling intertitles I’ve seen pops up). On the other hand, he doesn’t seem to care much for his characters, so why should we? Viewers are given little or no reason to care about Samantha, who comes across as not exactly a nice person, and the sexual politics angle is off-kilter and murky; is the date-rape she suffers, intended as some kind of punishment for being a lesbian? Or is it just another version of the old “have sex and die” horror trope? Probably best not to concern yourself too deeply about such things, and wallow in an enthusiastically gooey portrayal of things falling apart.