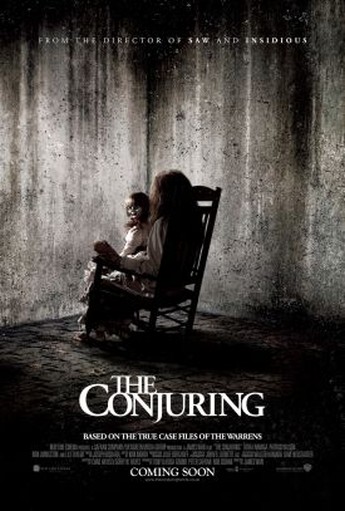 On the one hand, this is little more than a selection of cheap scares, mostly of the obvious kind, spliced together over a thin plot, that relies upon over-familiar clichés and characters so stupid that the family dog, who refuses to go into their new house, is likely the smartest character in the entire film. It’s not long before things are going bump in the night with increasing volume. Rather than heading for the nearest Motel 6, Roger (Livingston) and Carolyn (Taylor) call in paranormal investigators and husband/wife pairing, Ed and Lorraine Warren (Wilson and Farmiga), who discover the farmhouse in question has a long history of driving its inhabitants mad, and causing them to kill either themselves or others, particularly their children. Or, technically, something which inhabits the farmhouse, which may now be occupying one of the latest crop of residents. Unfortunately, they’re not Catholics, so the Vatican is rather reticent to order any kind of exorcism. Still, Ed has seen the rituals often enough. What could possibly go wrong?

As I said, there’s little here you won’t have seen before, and you’ll probably find yourself rolling your eyes more than once at the idiocy necessary to the plot. However, the crucial thing is, the execution is well enough done, that it still works: fear isn’t an emotion that requires any kind of logic in order to exist. Indeed, you could argue logic is its mortal enemy: knowing that creaking sound is your house cooling and settling down for the night is a great antidote to any terror it may generate. Certainly, this renders horror movies more resistant to such things, as long as they do the other stuff right, and this generally succeeds there. It may seem like shallow pushing of the audience’s buttons, yet still requires skill, and Wan is good at what he does. This is the cinematic version of a story told by kids around a late-night fire, or under the blankets at a sleepover. While it’s not subtle and nor is it clever, it still does the job, all the way from the opening tale of a creepy doll, through to the more extreme occult shenanigans.