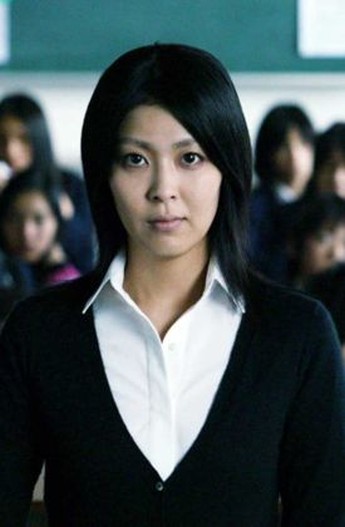 Teacher Yuko Moriguchi (Matsu) stands in front of a bored class of teenagers, talking about how she will shortly be quitting. They don’t pay any attention – that is, until she quietly announces two pupils were responsible for the death of her young daughter, a crime that went entirely unpunished. Society may have let them get away with it, but Moriguchi has absolutely no intention of doing so. While she carefully refers to them as “Student A” and “Student B”, the class knows full well she means Shuya (Nishii) and Naoki (Fujiwara). The former wants his separated mother to pay attention to him, while the latter is easily led along by the unexpected friendship Shuya offers. Neither are prepared for the wrath of Moriguchi, who sets out to destroy them utterly – more in a psychological sense than physically. Though there’s a very unpleasant surprise in the milk she served up, just before revealing all to the class…

Man, this is seriously fucked-up, on a whole number of levels, and it’s probably best that you don’t know much more about it than that. But if you have to: just about everyone is damaged goods, and the tone is more than similar to the Park Chan-wook Vengeance trilogy, in its bleak view of human nature, and belief that if anything can go wrong, it should. Matsu is outstanding as the person who had deliberately buried all humanity as the result of tragedy, and is not absolutely focused on destroying those who have destroyed her life, by taking away what they love the most – or, more accurately, making them destroy it themselves. Directed with significant visual panache by Nakashima – he clearly loves his slo-mo – it’s tragedy on an intense, Shakespearean level, that packs an enormous wallop in a way you can’t see until too late. No-one here gets out alive: if not clinically dead, spiritually so.