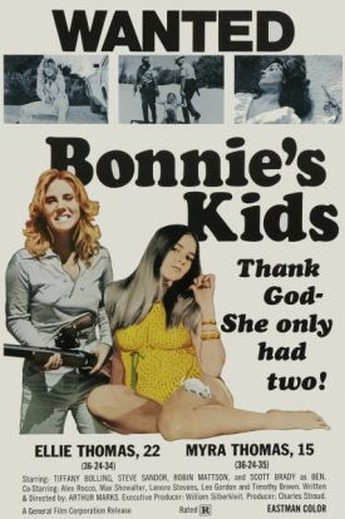 An impressively-grimy piece of drive-in, this starts with sisters Ellie (Bolling) and Myra (Mattson) killing their sleazy stepfather and running off to the big city to live with Uncle Ben and his wife. However, just as you think you know where this is going, it takes a right turn. Ellie is tasked with going to Desert Springs to pick up a package; however, she instead hooks up with Larry (Sandor), the man delivering it, and talks him into opening the package. When they discover the large bundles of cash it contains, they go on the lam – understandably, the owner of the parcel is unhappy with this development and sends two thugs after them. One is played by the guy who was Moe Green in The Godfather, and the other is a black man with the unfortunate name of “Digger”… Meanwhile, little sister Myra is discovering that Auntie Diana is a predatory lesbian, and for “before they were famous fans,” see if you can spot Sharon Gless as a diner waitress before she was Cagney. Or was it Lacey?

Not much doubt this was an inspiration for Tarantino, who nicked the “couple on the lam” for True Romance and the “inter-racial pair of killers” for Pulp Fiction. That aside, the movie stands the test of time impressively. While there’s no shortage of titillation, especially early (Mattson looks young enough to make me check that To Catch a Predator weren’t about to come in, but fortunately, she wasn’t the 15-year old she played), it doesn’t rely entirely on this, and also delivers a decent plot and interesting, if not exactly sympathetic, characters. Indeed, there’s not really a single, genuinely likeable person here – Larry’s perhaps the closest, and he’s an idiot. Not that this amorality is a bad thing, now and again. It’s not perfect: Myra all but vanishes from the movie after telling her aunt exactly what she (and society) thinks of her, and the thugs blow away an innocent couple even though they’ve seen Larry and know what he looks like. But, all in all, this is solid cinema, downbeat and well-crafted despite its exploitation origins.