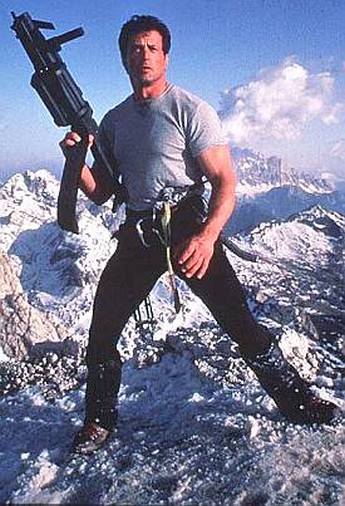 Any similarity to The Sound of Music is purely coincidental I’m sure, though frankly, the idea of Stallone in a wimple is more amusing than the film itself. A bunch of criminals, led by John Lithgow, steal $100m in cash, but end up losing it on a mountain-top. They take Stallone and his ex-best pal Rooker as hostage guides, to lead them to their stash. Mayhem ensues. Even for my well-developed sense of disbelief, this was pushing it, and unfortunately, there wasn’t a great deal to distract from the plot holes.

Lithgow could learn a great deal from, say, Alan Rickman, about being a bad guy, and the sight of him going toe-to-toe with Sly is more laughable than anything. It probably deserves an award for Best Death By Spiky Geological Formation, which echoes one by Spiky Meteorological Formation in Harlin’s Die Hard 2. He must have a fondness for pointy things — guess that’s why he married Geena Davis. Anyway, that I am forced to spend half this review wittering on about such things, tells you something about the paucity of interest in the movie. And that’s snow lie…