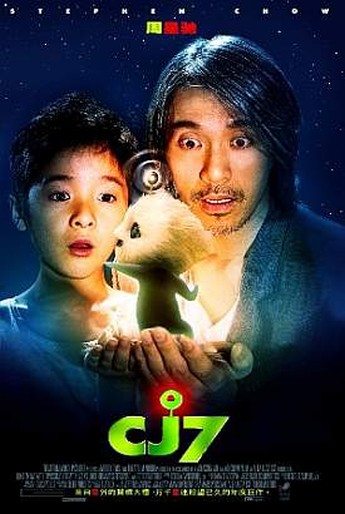 While not quite as accessible as Shaolin Soccer or Kung-Fu Hustle – probably too many poop jokes for a multiplex audience – it still has much the same philosophy behind it, though Chow takes more of a back-sea toot. He plays a loser construction worker, struggling to put his son (Xu Jiao – who is actually a young girl) through private school, for which neither of them are particularly suited. Things change, however, when Dad – looking for a pair of shoes at the local garbage dump – finds a lime-green beachball, not realizing it is actually an extra-terrestrial creature which has fallen off a UFO. When Dicky finds out what he’s got, he imagines the alien, which he names CJ7 [a reference to the Chinese space program] will solve all his problems: the neighborhood dog; the bullies at school who torment him; that whole pesky education thing. However, it turns out that CJ7 is…well, a bit crap in these areas.

I can see why this was quietly buried by the distributors, for sequences like the one where CJ7 machine-gun sprays Dicky with excrement. Yeah, that’ll play in Boise. However, it does have a gentle sense of morality that one senses is more genuine, than driven by a desire to sell Happy Meals. That helps to power the movie and sustain it, even when (and this happens quite often) it threatens to collapse under a weight of sentimentality that would sink a comparable Western movies. The dubbed version we saw doesn’t do too much harm – and provides at least one genuine laugh, when a voice isn’t what you’d expect to hear. There are the usual themes – poverty is no reason to forget about basic human virtues like kindness, honesty and loyalty – which, again, could seem trite and artificial. However, I can’t say I minded too much: if morality still has a place in cinema, this is as good a one as any.