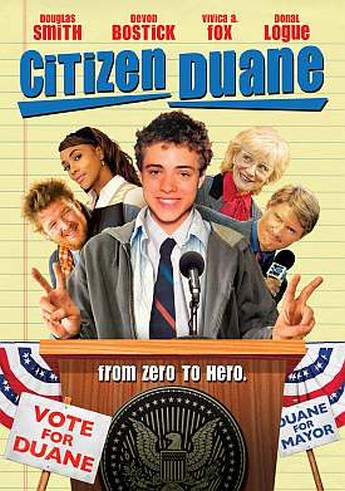 Duane Balfour (Smith) is a downtrodden high-school senior with a grudge against Chad Milton, whose grandmother (Dunsmore) is running for yet another term as mayor. After Duane’s latest plot for revenge – involving the building of an actual “cycle of violence” – goes awry, he decides to stand for mayor himself, with the somewhat dubious help of his kid brother, Maurie, (Carella) as campaign manager, and a local bar-owner who once tried to train a monkey as a jockey. The decision is not least because of Mayor Milton’s involvement in the death of Duane’s father. Turns out a Quixotic tendency to bite off more than they can chew appears to run in the genes – much to the horror of our hero’s mother (Watson), who does not want to lose another man in her life to political activism, and tries to dissuade him. Duane’s long-suffering girlfriend is not impressed either.

The characters are more interesting here than the film, with the creators never managing to exploit the potential inherent in the situation – an old, vested product of the political system, going up against a young gun with a grudge and no fear. Indeed, the way that storyline is used, it doesn’t so much develop as peter out lamely, and the way it ends is more inevitable than the delightful surprise that the movie wants it to be. I actually liked Duane, who is not your typical high-school protaganist: in many ways, he is spiky and unsympathetic, but Smith’s performance overcomes that and turns him into an engaging character, who’ll resonate with anyone who was an outsiders at high-school. But in terms of what the movie does with him and the quirky support, who are also enjoyable, this feels more like a mid-season TV episode of Parker Lewis Can’t Lose, than a fully-developed movie. However, I did quite enjoy PLCL…