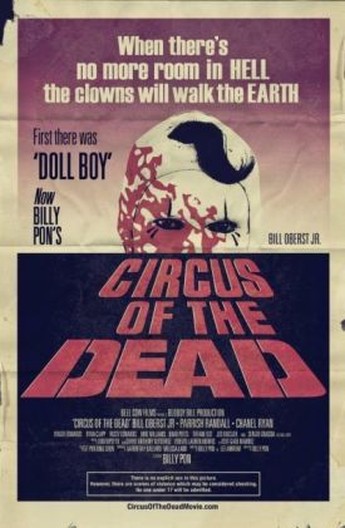 This starts with a quote: “Clowns can get away with murder.” This is then revealed to have been said by infamous clown (and serial killer) John Wayne Gacy, and much of what follows is apparently intended to demonstrate the truth of that. Papa Corn (Oberst) and his merry band of psychopaths are part of a travelling circus, which roams Texas: the clowns punish those they perceive as “sinning” in brutal fashion, which includes bringing them into the show and beating them mercilessly, while the crowd laughs and laughs… Papa takes a fancy to Donald Johnson (Randall) and his picture-perfect family, after they attend a performance, but following them home, he discovers things aren’t quite what they seem. Johnson’s wife is having an affair; that’s rapidly taken care of, and their two daughters abducted by the insane clown posse. Donald is also kidnapped, and with the fate of his children now entirely in Papa’s hands, has no option but to follow along with the resultant roaring rampage of rape and… a synonym for “murder” that begins with R. Work with me here, dammit!

Really, this film revolves around Oberst, and it’s fortunate that he hits it out of the park, performance-wise. Papa Corn is one of the great movie psychos of recent years, who can switch from being charming to barking insane in the blink of an eye: charming and yet utterly without any kind of moral compass or governor. It’s quite hypnotic to watch, and feels like being trapped in a box with a rattlesnake: you cannot let your guard drop for even a minute. It reminded me more than a little of The Hitcher: there’s no particular reason for Papa to take such an interest in pushing Donald over the edge, but the process is inexorable. Certainly, Johnson’s early complaints about life being mundane and boring take on a sick irony, as things take a turn which certainly could not be described in that way, yet is far from an improvement. Sometimes, mundane and boring are much more a blessing than we perhaps appreciate.

There are times when the film does go over the edge, in terms of apparently being shocking for the mere sake of it – a scene involving a baby is the most obvious slip into that category. It’s a shame, because that isn’t when the film is most effective: it’s much better, for example, when the completely deranged villain and his crew are interacting with the public, and as the quote mentioned says, getting away with murder. It’s this contrast which packs the greatest wallop, and for anyone who doesn’t suffer from coulrophobia – that’s the fear of clowns (never say we aren’t educational!) – you may well want to review your opinion after seeing this one.