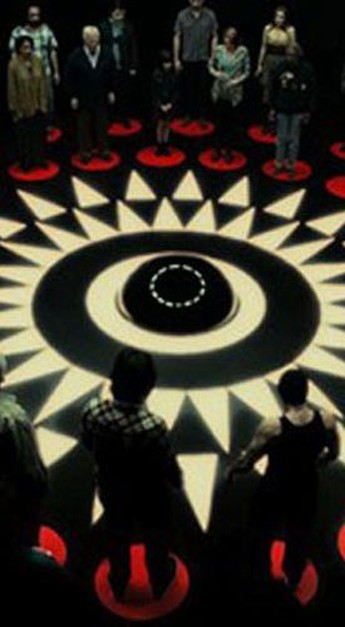 Fifty people find themselves in a room, standing in a circle. If they move off their spot, they die. If they touch another person, they die. Every two minutes, someone is killed, and the dwindling number of survivors figure out that they can “vote” for who will be the next victim, with the machine in the room’s middle both monitoring their thoughts and dealing out the decision. Why were they picked? Who is doing this to them? And, most importantly, how will anyone survive? Eventually, two blocks emerge: one that feels the last survivor should be either the youngest girl or a pregnant woman (Master), and another group who think everyone has a right to live, and those two don’t deserve special treatment. To borrow a line from another movie: who will survive, and what will be left of them?

This seems like there might be just enough meat here for a Twilight Zone episode, and I was impressed that it manages to reach feature length without any difficulty. It is a little hand-wavey at the beginning, glossing over quite how the participants manage to figure everything out quite so quickly – I suspect, in the unlikely event of this becoming reality, we’d be at about a 50% mortality rate before that was sorted. However, this rapid leap is likely a cinematic necessity, and once it gets going, it maintains a relentless pace, without any time-outs or external action – everything except the final scene, takes place in the circle. A cast of largely unknowns gives little clue as to how things will go, and the shifting loyalties and tensions make fascinating viewing. The script was apparently inspired by 12 Angry Men, together with Cube, and all told, this forms a worthy successor to both.