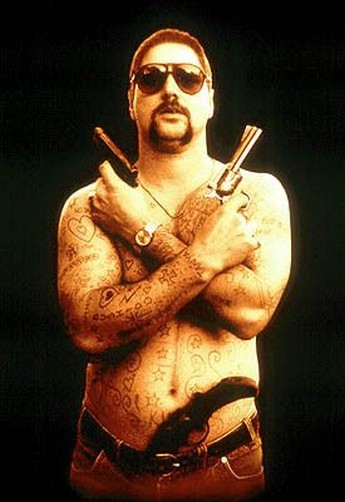 Loosely based on the life story of notorious Australian criminal Mark ‘Chopper’ Read, this covers his life both in jail, where he has spent almost his entire adult life up until his mid-30’s, and then after his release from prison as he tries – and largely fails – to adjust to a more normal existence. As depicted here – and that may or may not reflect reality (as Read says at one point, “Never let the truth get in the way of a good yarn”) – he’s an extraordinary character. Read will shoot someone to extract money from them, then insist on taking them to the hospital. Or when his best friend tries to kill him in jail, he simply responds, “If you keep stabbing me, you’re going to kill me,” and gives him a big hug, then tells the cops, “It’s no big deal. It’s like if your mum stabs you, whaddya do?” Violence, both receiving and delivering it, is simply part of his life, and that informs almost everything he does, as when he beats up his girlfriend, then criticizes her for the incident upsetting her mother.

The film does a good job of putting over the complex nature of the man, who was at once both charming and deadly, capable of switching between the two extremes at any moment [the film only brushes against his fondness for removing people’s toes with bolt-cutters]. It succeeds almost entirely on the strength of Bana’s portrayal, who manages to capture both sides of Read’s personality, to create a character who is both fascinating and simultaneously repellent, who wants to be loved, but has this strange, warped idea of what “love” is. The script is less successful, never succeeding in putting together a coherent narrative: one moment, he’s in jail, getting his ears cut off, the next he’s walking free. Non-Australian viewers will probably want closed captions, though the IFC ones were woefully inadequate, e.g translating “I don’t know how your mind works” as “I don’t know how your Mom raised you.” WTF? Despite this, it’s still a solid glimpse into the abyss of borderline insanity.