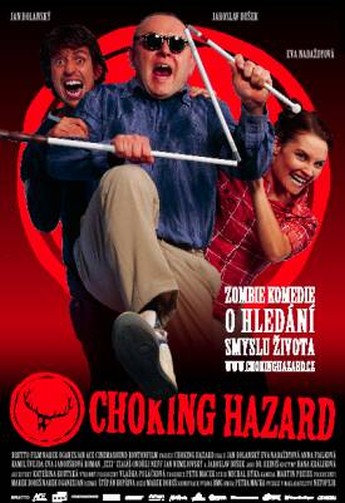 It’s been a good year for the laughing dead. Undead from Oz is getting cult buzz, while many 2004 Top 10’s (not least ours) will include Shaun of the Dead. Not to be outdone, here’s the Czech entry in the Eurovision Zom Contest, in which a group of philosophy students, their blind teacher, the staff of a remote hotel and a Jehovah’s Witness porn actor, find themselves facing a horde of woombies – that’s “woodmen zombies”. The tone is remarkably close to Shaun: they share a laconic hero who doesn’t want to be heroic, dry wit, lack of explanations, and even a retro-cheesy zombie dance number – Boney M here, rather than Queen. Though I suspect this is just coincidence; I can’t claim either a rip-off, when they premiered just five days apart [March 29 for Shaun, April 2 for Hazard].

Additionally, it seems likely they also have the same fondness for “local flavour”, which would explain why rather too often us non-Czechs were left scratching our heads; for example, Dada Patrasova, the woman wielding a shotgun at the start, is an icon of local kids’ TV. A lot of the gore here happens out of shot, which feels like a cheat – replacing gobbets of flesh are gobbets of existential philosophy which I found deadly dull. Much better is the droll humour, notably a debate over a squishy body part, and other moments I don’t want to spoil. Being honest, Shaun is better, both as a horror film and a comedy, but this is not your average Czech movie, and is certainly worth a look.