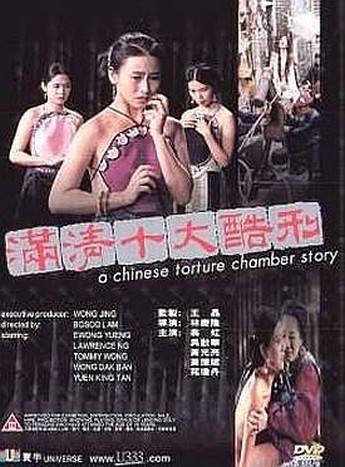 Great title, fabulous cover, but trashmeister Wong doesn’t quite deliver the goods here. Sure, there are some tortuous moments, but it’s more of a whodunnit, even if Miss Marple never had to solve a case where the victim’s penis exploded. It’s told mostly in flashback, with the various threads unravelling slowly, in a welter of comedy and soft-porn which is certainly unique — the nude sexual kung-fu was particularly impressive.

The problem is that it lurches around wildly from genre to genre, flailing wildly away like a genetically modified octopus, neither fish nor fowl. Interrogation scenes which border on the sadistic mix with Ghost parodies: rather than making a pot, imagine Demi Moore jerking off a hugely endowed Patrick Swayze. That’s the kind of level you’re at here, dull it ain’t, but neither is it anything except a total mess, where you don’t give a damn about anyone involved. Rarely has a star been so appropriately named.